Proposed sign movements and speed limits in the Parish

Posted on January 23, 2020 by utkintonwebmaster

A week or two ago our Chair had discussions with two senior managers from CWaC Highways with regard to three issues – we will outline them below:

So let us tell you more:

Since its installation in the mid 2000s this sign has served as a warning of  speeds as you enter the village via Quarry Bank, however, over recent years it has begun to ‘not respond’ because it falls within the 20mph zone that CWaC put in place a couple of years ago.  Last year Cllr Moore-Dutton and Frank Tunney gained agreement from CWaC to their relocating this sign at no cost to the Parish and, following much to-ing and fro-ing it has been agreed that it will be relocated to the bus stop opposite Quarry Bank pointing towards Tirley Garth.  It should be remembered, however, that these are not cameras and do not count as mandatory speed signs but are reminders of the limits..

We have also had discussions related to the road speeds on Stable Lane and Utkinton Lane immediately bounding the Village Hall and Church.  The CWaC Road Safety Engineer has agreed to put a case to the local police to reduce the speed limits to 30 mph in the area seen in the picture below 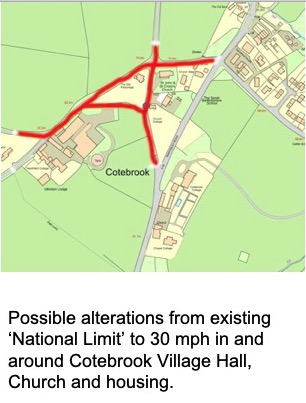 Once we know what is likely to happen we will let you know.

We also asked the CWaC Road Safety Engineer as to the possibility of extending the recent 20mph zone to John Street and he has agreed to discuss this with the Highways team and the Chief Executive.  The diagram below shows what we proposed.  The blue dots show the current bust drop off points.